Drug abuse is deliberate consumption of an illegal drug or overindulgence of a prescribed psychoactive or performance-enhancing drug for non-therapeutic, non-medicinal use/effects. Addicted individuals have uncontrollable, irresistible and compulsive desire and persistence in its use despite negative consequences.

Adverse affects of drugs of abuse

Short term: Even a single use of an intoxicating drug can affect a person’s judgment and decisonmaking—resulting in accidents, poor performance in a school or sports activity, unplanned risky behavior, and the risk of overdosing.

Long term: Repeated drug abuse can lead to serious problems, such as poor academic outcomes, mood changes (depending on the drug: depression, anxiety, paranoia, psychosis), and social or family problems caused or worsened by drugs.

The physical signs could vary from individual to individual and it could be tachycardia and hypertension with cocaine while opiates cause bradycardia and respiratory distress besides other constitutional symptoms and signs. Spreading of infectious diseases like HIV/AIDS, Hepatitis B, pregnancy related complications and deformed newborns, resorting to crime and death due to overdose of drugs are some of the dire consequences of drug abuse.

Some schools, hospitals, or places of employment conduct drug testing. There are a number of ways this can be done, including: pre-employment testing, random testing, reasonable suspicion/cause testing, post-accident testing, return to duty testing, and follow-up testing. This usually involves collecting urine samples to test for drugs such as marijuana, cocaine, amphetamines, PCP, and opiates.

Following the testing models established in the workplace, some schools have initiated random drug testing and/or reasonable suspicion/cause testing. Schools that have adopted random student drug testing are hoping to decrease drug abuse among students via two routes. First, schools that conduct testing hope that random testing will serve as a deterrent, and give students a reason to resist peer pressure to take drugs. Secondly, drug testing can identify adolescents who have started using drugs so that interventions can occur early, or identify adolescents who already have drug problems, so they can be referred for treatment. Drug abuse not only interferes with a student’s ability to learn, but it can also disrupt the teaching environment, affecting other students as well. During random testing schools select, using a random process (like flipping a coin), one or more individuals from the student population to undergo drug testing.

Screening tests for drugs of abuse

Screening for dugs of abuse is done on urine and  blood  specimens  by fluorescence Polarization Immunoassay, at Dr. LAL PATHLABS. These screening tests are preliminary analytical tests. The results must be confirmed by Gas chromatography / Mass Spectrometry.

Various testing methods normally test for a “panel” of drugs. Typically, a drug panel tests for marijuana, cocaine, opioids, amphetamines, alcohol and PCP. Alcohol does not remain in the blood long enough for most tests to detect recent use. Breathalyzers and oral fluid tests can detect current use of alcohol.

The Urine Drug Screen is a laboratory-based testing consisting of the following drugs:

Tests are very accurate but not 100 percent accurate. Usually samples should be divided so that if an initial test is positive a confirmation test can be conducted Awareness of possible false-positive results, especially when screening test results for amphetamines or opioids is essential. Over-the-counter cold medications containing pseudoephedrine can cause false- positive screening results for amphetamine, although follow-up testing with gas chromatography and mass spectrometry is highly specific and can reliably confirm the presence of amphetamine. Ingestion of foods that contain poppy seeds makes interpretation of drug testing more difficult, because it can cause screening and gas chromatography and mass spectrometry results to be falsely positive for morphine and/or codeine.

It is fairly easy to defeat drug tests, and most drug-involved youth are all too familiar with ways to do so. Even properly collected specimens must have checks for validity (eg, urine specificgravity and creatinine), because the easiest way to defeat a drug testing is by simple dilution.

With the exception of marijuana, the window of detection for most drugs of abuse is 72 hours or less. Therefore, negative test results indicate only that the adolescent did not use a specific drug during the past several days

For how long can drugs be detected in urine?

Each drug is cleared by the body at different rates. When you can find drugs in the urine depends on the drug taken, how often the person takes the drug, and how the drug was taken. The table below shows minimum and maximum times you can detect drugs in urine. 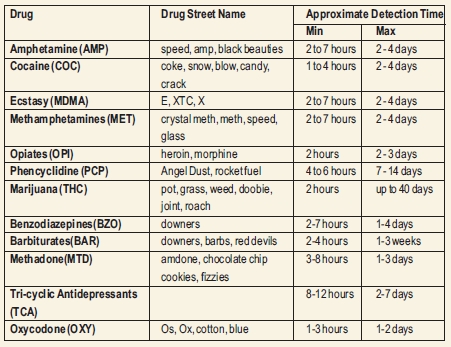 What are drug cut-off levels?

Established “cut – off” levels are conformed to when testing for drugs of abuse. In other words, though some level of drug may be present in a urine sample, the sample would still be considered a NEGATIVE screening result if the drug level is below the cut-off level.
Samples at or near the cut-off level have the greatest margin of error.