Prenatal screening is an issue that has become more important over the past few years. Most elements of standard prenatal care are relatively straightforward and easy for patients to understand and accept, but screening and diagnostic testing for chromosomal abnormalities remain confusing, emotionally charged and fraught with uncertain risks.

The most commonly used test for genetic diagnosis is amniocentesis, but the rate of spontaneous fetal loss related to amniocentesis averages about one in every 200 procedures.

NTDs are one of the most common serious fetal malformations. The incidence of NTDs is 1-5 for every 1,000 births. These defects include anencephaly, spina bifida and encephalocele. Spina bifida has the third highest lifetime cost of any congenital anomaly.

Trisomy 21 (Down syndrome) is associated with mental retardation, malformation of the heart, gastrointestinal tract, eyes and ears, and early Alzheimer’s disease.1 The overall risk of having an affected fetus is one in 1,000 live births.

The second trimester risk is one in 270 in women 35 to 40 years of age, and one in 100 in women older than 40 years.1 It has long been accepted that women who are 35 years or older at the time of delivery should be offered prenatal diagnosis with amniocentesis or chorionic villus sampling.

Although the risk for trisomy 21 increases with maternal age, an estimated 75 percent of affected fetuses are born to mothers younger than 35 years.

Because of this risk, it is important to provide pregnant women who are younger than 35 years with noninvasive screening for this trisomy.

Trisomy 18 (Edwards’ syndrome) occurs in one in every 6,000 births and is associated with low birth weight, mental retardation and cranial, cardiac and renal malformations.

Most infants affected with this trisomy die within the first year of life.

ALPHA-FETOPROTEIN: AFP is synthesized in the yolk sac, gastrointestinal tract and liver of the fetus. Fetal plasma levels peak at 10 to 13 weeks’ gestation and decline progressively until term, while maternal levels peak in the third trimester. Laboratory measurements of AFP levels are reported as multiples of the median (MOM).

HUMAN CHORIONIC GONADOTROPIN: A complex glycoprotein, hCG is produced exclusively by the syncytiotrophoblast shortly after implantation into the uterine wall. It increases rapidly in the first eight weeks of gestation.9 It then decreases steadily until 20 weeks, when it plateaus. Maternal weight and parity affect hCG levels. An increased hCG level appears to be the most sensitive marker for detecting trisomy 21. A low hCG level is associated with trisomy 18. The hCG levels are normal in NTDs. 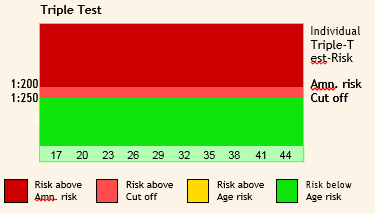 The most important factor affecting the analysis is Maternal age.

Beyond the technical aspects of maternal serum analyte screening lies the human aspect. Patients need to understand what screening tests are being offered and how they may affect them. The physician needs to provide patients with the risks and benefits of performing these screens. While appropriate counseling before testing is essential, it is not always done. Counseling should be nondirective and include all relevant information. It is important that patients understand that this is a screening test and that a positive or negative result is not an absolute indication that something is or is not wrong with their infant. It is also important that patients not be required to make definitive decisions about how they will respond to the results before the testing occurs.

What Additional Tests Will Be Offered?

A change in pregnancy dates may also show that the test was drawn too early and will have to be repeated. When pregnancy dates are confirmed, a targeted ultrasound is recommended to look for birth defects and other signs of pregnancy complications.

All cases of anencephaly should be found on ultrasound in the second-trimester. Most cases of spina bifida, but not all, can be seen on ultrasound as well. Ultrasound can also find changes that suggest an increased risk for Down syndrome or trisomy 18; however, it is important to remember that ultrasound cannot diagnose or rule out a chromosome abnormality.

If a chromosome abnormality is suspected, amniocentesis is offered for prenatal diagnosis. Amniocentesis involves the removal of a small amount of amniotic fluid. This fluid naturally contains fetal skin cells that can be studied to find out if a baby has extra or missing chromosomes. The amniotic fluid also contains AFP and a chemical called acetylcholinesterase (AChE) that can be measured to detect neural tube defects.

“ Double test is a maternal blood screening test performed “ in the first trimester between 9-13 weeks of gestation. The specific substances analyzed are: Free Beta hCG, PAPP-A

Double test is a maternal blood screening test performed in the first trimester between 9-13 weeks of gestation. The specific substances analyzed are: Free Beta hCG, PAPP-A

Human chorionic gonadotropin (hCG) is a protein made by the placenta that consists of two subunits, alpha and beta. hCG is present in two forms: intact hCG (consisting of both alpha and beta subunits) and free Beta hCG (the beta subunit of hCG alone). Serum levels of hCG tend to be high in patients carrying a fetus affected with Down syndrome. The median concentration for free Beta hCG in the blood of women carrying fetuses with Down syndrome, measured as a multiple of the median (MoM), is 1.9 (compared to 1.0 for unaffected fetuses). This large difference provides the basis for the discrimination between affected and unaffected fetuses. Intact hCG, on the other hand, does not discriminate as well: its median MoM is less than 1.3. Furthermore, free Beta is significantly reduced in the blood of women carrying Trisomy 18 fetuses, with a median MoM of 0.18. Free Beta is the most specific and sensitive marker for Down syndrome and Trisomy 18.

The main advantage of measuring free Beta hCG, instead of intact hCG, is a significantly higher detection rate for a given false positive rate.

Pregnancy Associated Plasma Protein A (PAPP-A) is also produced by the placenta. PAPP-A is significantly reduced in the blood of women carrying fetuses with Down syndrome and Trisomy 18: the median MoMs are 0.44 and 0.32, respectively (compared to 1.0 for unaffected fetuses). These dramatic differences from normal provide excellent discrimination between affected and unaffected fetuses.

One of the single most important breakthroughs in chromosome abnormality screening was the ultrasonographic observation of a correlation between a nuchal translucency (accumulation of fluid at the back of the fetal neck) observed on ultrasound between 10 and 13 weeks and the incidence of Down syndrome and other abnormalities. NT is increased in fetuses with chromosome abnormalities, heart defects, and certain genetic syndromes.

Combination of Double test with nuchal translucency increases the detection rate of both Trisomy 21 and 18. This test is performed between 11-13 weeks of gestation. 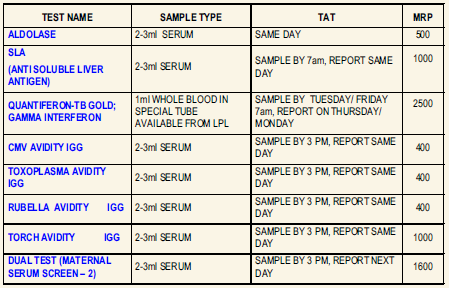 Usage: Latent tuberculosis infection is a non-communicable asymptomatic condition which might develop into overt Tuberculosis within months or years. QuantiFERON-TB Gold test detects the response to peptide antigens that simulate Mycobacterial proteins through a cell mediated immune reaction. These proteins are absent from BCG strains and most non-tuberculosis Mycobacteria. Individuals infected with M.tuberculosis complex organisms usually have lymphocytes in their blood that recognize these antigens. This recognition process involves the generation and secretion of the cytokine IFN-Gamma. The detection and quantification of IFN-Gamma forms the basis of this test.

Specimen: Collect 1 mL whole blood each in a set of special QuantiFERON – TB Gold IT tubes available from LPL. Shake the tubes vigorously at least 10 times to ensure thorough mixing. Ship at room temperature to reach lab within 16 hours OR Incubate the tubes immediately at 370C for 16-24 hours. Ship refrigerated within 72 hrs. DO NOT FREEZE.