Diet During Pregnancy – What to Eat and What to Avoid

Sometimes much awaited, sometimes a surprise − but in either case, pregnancy is one of the most magical times in a woman’s life. At this time, a woman goes through many physical, hormonal, and emotional changes. It is equally important to take care of the mind and the body during this period. While the means for staying happy and relaxed vary from woman to woman, there are some common ways to keep the body healthy that apply to everyone. Taking a balanced diet is one of the first ways to do that. This blog enlists few elements that should be part of pregnancy diet: 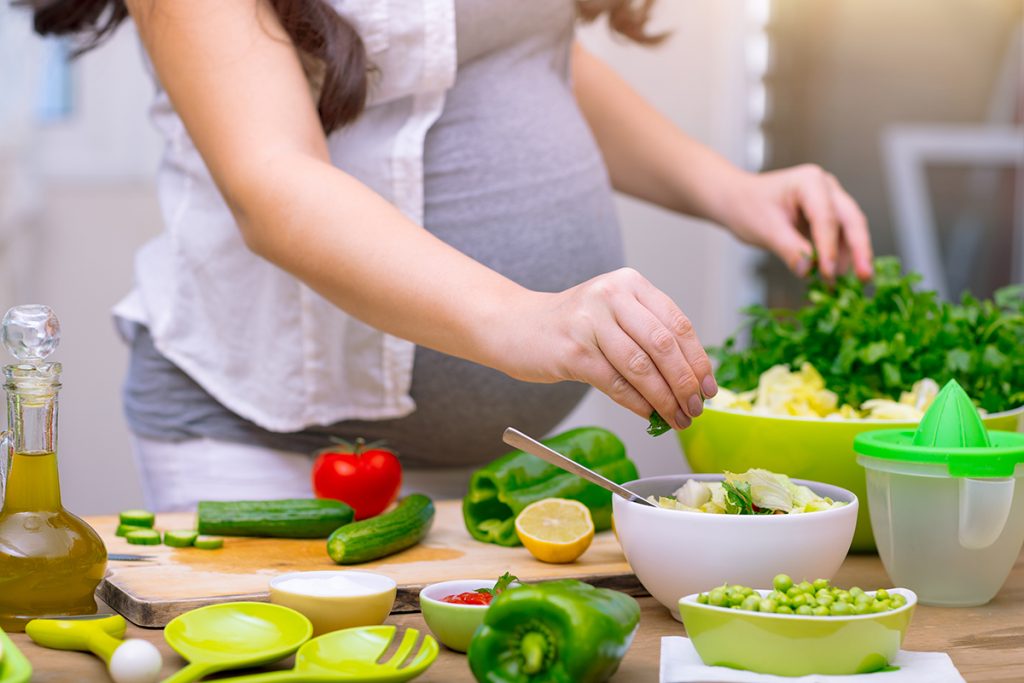 During pregnancy, the body of a woman needs additional nutrients, vitamins, and minerals. Poor eating habits and excess weight gain may increase the risk of gestational diabetes and pregnancy or birth complications. Therefore, maintaining a healthy diet during pregnancy is very important for good health of the mother and the baby.

Diet during pregnancy should be balanced and have an appropriate blend of the following nutrients:

Calcium: Calcium is an important part of pregnancy foods. Calcium is required to build strong bones and teeth. Calcium also allows the blood to clot normally, nerves to function properly, and the heart to beat normally. Dairy products are the best source of calcium. Other sources of calcium are dark, leafy greens, fortified cereal, bread, fish, fortified orange juices, almonds, and sesame seeds.

Folic Acid: A healthy pregnancy diet must include folic acid, which is a vitamin that can help reduce the risk of neural tube defects, which are birth defects of the brain and spinal cord. Foods rich in folic acid include lentils, kidney beans, green leafy vegetables, citrus fruits, nuts, and beans. Folic acid is also added as a supplement to certain foods such as fortified bread, cereal, pasta, rice, and flour.

Iron: Iron is an important part of red blood cells, which carry oxygen through the body. It is an important constituent of food for pregnant women. Iron helps to build immunity and helps to avoid tiredness, weakness, irritability, and depression. Good sources include whole grain products, dried fruit and beans, and green leafy vegetables.

Vitamin A: Foods rich in Vitamin A are leafy green vegetables, deep yellow or orange vegetables, milk, and liver.

Vitamin D: Vitamin D works with calcium to help develop the baby’s bones and teeth. It is also essential for healthy skin and eyesight, and is therefore included in all pregnancy diet menus. Good sources are milk fortified with vitamin D and fatty fish such as salmon. Exposure to sunlight also converts a chemical in the skin to vitamin D.

Foods to Avoid During Pregnancy

Limit foods that are high in sugar, fat, and salt

Having too much saturated fat can increase the amount of cholesterol in the blood, which increases the chance of developing heart disease. Therefore, sugar, fat, and salt rich items fall among the foods to avoid in first month of pregnancy.

Caffeine is a substance that occurs naturally in foods such as tea, coffee, and chocolate. Having a lot of caffeine increases the risk of having a miscarriage and a baby with low birth weight.

Avoid foods which may have high levels of listeria

Some of the foods to avoid during pregnancy are those which contain listeria. Listeria is a germ to which pregnant women are more likely to become infected. It sometimes causes miscarriage, stillbirth or infections in the baby after birth. Foods which are most at risk of carrying listeria are:

Avoid Consumption of Alcohol or Tobacco

Effects of Smoking During Pregnancy:

Smoking during pregnancy exposes the baby to harmful chemicals and can result in a far higher risk of:

Effects of Drinking During Pregnancy:

It is advised to restrict consumption of all forms of alcohol during pregnancy as it can be passed directly to the baby through the umbilical cord. Thus, alcohol should never be a part of diet for pregnant women. Drinking alcohol during pregnancy can cause miscarriage, stillbirth, and a range of lifelong physical, behavioral, and intellectual disabilities. These disabilities are known as fetal alcohol spectrum disorders (FASDs). Children with FASDs might have the following characteristics and behaviors:

Diet During Pregnancy – What to Eat and What to Avoid was last modified: March 11th, 2020 by Team Dr Lal PathLabs