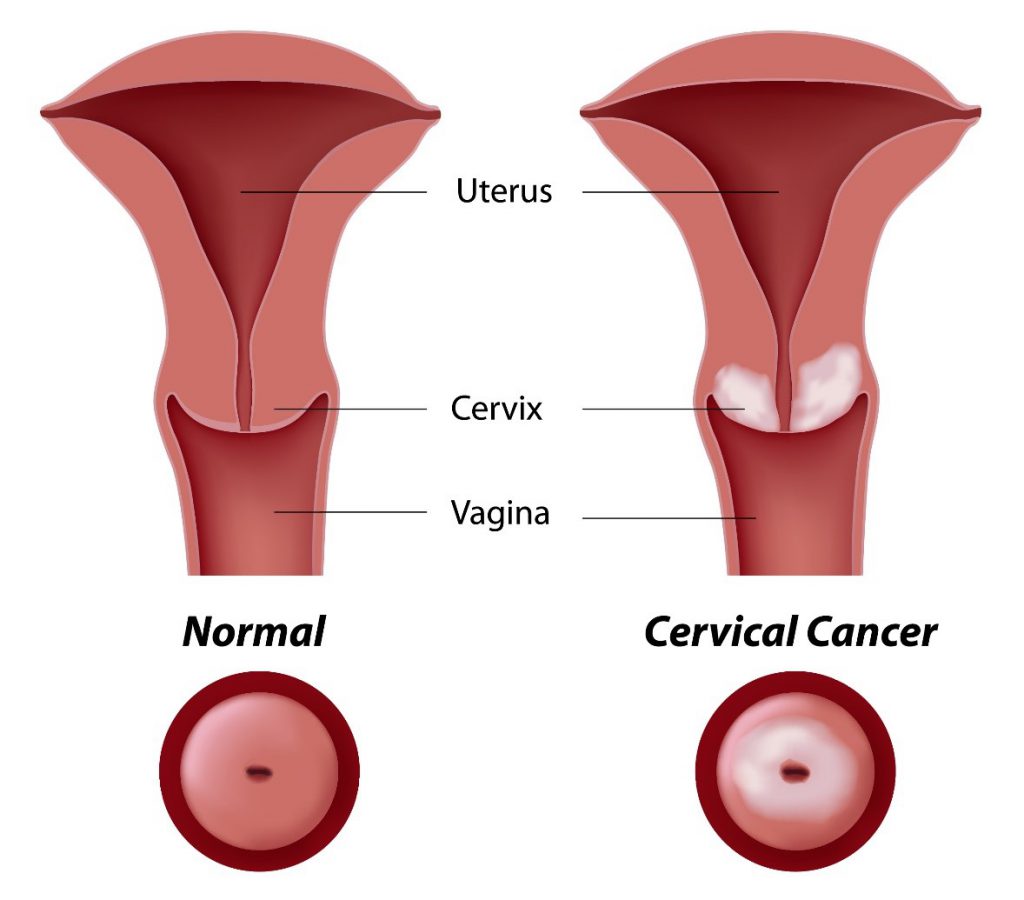 Cervical Cancer is one of the most common types of cancer found among women all over the world. Since it develops over a prolonged period of time, it is also one of the most avertible cancers, if detected timely. It originates in the cervix – lowermost part of the uterus, where it connects with the vaginal wall. Abnormal, uncontrolled growth of cells on the cervix causes cervical cancer. Cervical Cancer symptoms are typically not visible until the cancerous cells start invading the surrounding tissues.

Majority of the cervical cancers are caused by a specific type of virus called Human Papilloma Virus (HPV). Some definitive strains of HPV cause normal cervical cells to become abnormal, and even cancerous, over a period of time. HPV can be transmitted sexually. It is noticed that most adult women have been infected with HPV at some time or the other. In most cases, the infection goes on its own. But sometimes HPV can lead to cancer of the cervix.

Treatment of cervical cancer may include surgery, targeted therapy, chemotherapy, therapy from radiation, or a combination. The kind of treatment depends on the size of the tumor and its spread to other organs. A timely detection would help in finding and treating any problematic issue before it turns into cancer.

Some common symptoms of cervical cancer are as follows:

1) Unusual and abnormal bleeding, such as

2) Pelvic Pain or pain in the lower belly – Such kind of pain is not related to the menstrual cycle. Pelvic pain especially during sexual intercourse could be a prominent sign of irregular changes in the cervix, which apparently is a serious condition.

4) Discomfort or pain during urination – Such pain is majorly caused due to blockage(s) in kidneys, which can be a major cervical cancer symptoms.

5) Increase in the urination frequency – Increased urination is also caused due to blockage(s) in kidneys. One might experience the urge to use restroom without any cause.

8) Swelling in hands, ankles and feet- This is yet another noticeable symptom of cervical cancer. The buildup of urine in kidneys causes swelling in body parts.

Cervical cancer usually occurs during mid-life. Many pieces of research and statistics have shown that a majority of women who are diagnosed with cervical cancer are belong to the age group of 35-55 years. On the other hand, approximately 20% diagnoses are made amid women who are older than 65 years of age. It thus, becomes imperative for them to get a cervical cancer treatment right away to avoid further life complications.

Health is the greatest gift you can give to yourself. In case you or your loved ones experience any cervical cancer symptoms mentioned above, do not waste a single minute and pay a visit Dr Lal PathLabs to get a test against the cancer done or avail special home collection and testing service.