What symptoms would suggest to assay Calprotectin in stool ?

Irritable bowel syndrome (IBS) & inflammatory bowel disease (IBD)
IBD is the term normally given to a group of conditions that involves inflammation of the gastrointestinal tract, such as Crohn’s disease and ulcerative colitis. These conditions can sometimes have serious complications, including a high risk of surgery and an increased risk of colorectal cancer. In both ulcerative colitis and Crohn’s disease, some people have active disease but no symptoms. IBS is a functional bowel disorder characterized by frequent bouts of bowel disturbance, abdominal pain and discomfort, and bloating. There is no clear cause, no distinctive pathology and treatment is symptomatic. Exacerbations may be triggered by diet or stress.

Why distinction is required between IBS from IBD?

What advantages does Calprotectin offer ?

Calprotectin assay in stool offers significant advantages in the evaluation of intestinal inflammation . In IBD patients level of Calprotectin is very high, while in IBS patients Calprotectin level is higher than in healthy patients but definitively lower than concentration found in active IBD patients.

The senstivity of the assay is 95% with specificity of 93%.

How often Calprotectin can be used in the follow-up IBD patients?

The follow-up of IBD patients subjected to drug treatment is carried out according to criteria that may vary depending upon the status of the patient, response to treatment and clinical remission. Under average conditions, Calprotectin assay should be done 2-3 times/year to check the trend of the faecal Calprotectin concentration. The decrease of Calprotectin values down to normal levels in a short period of time is usually an indication of a better prognosis.

Pediatric and neonatal use

The high sensitivity and specificity of calprotectin make the assay more reliable than other biochemical markers usually used for detecting possible bowel inflammation. In newborns, since bowel function is not yet fully developed, breast or formula feeding during the very first days of life triggers an inflammatory response accompanied by extremely high levels of calprotectin.

In subsequent days, these values decrease when the mucosa recovers its normal functions. Low or absent calprotectin level in newborns might be due to other bowel pathologies and require further investigations. 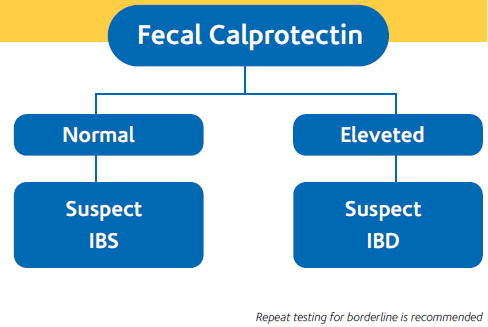 Role of FC has been largely studied in the last years. A good diagnostic precision in discriminating IBD and functional intestinal diseases has been widely reported, thus leading to propose FC as a filter to avoid unnecessary procedures in patients who are most likely to need endoscopy for suspected IBD. FCCs better correlate with IBD activity (more in UC than in CD patients) than the other classically recommended inflammatory parameters (ESR, CRP). FC appears to have a good diagnostic precision in predicting IBD relapse, possibly more in UC than in CD, as well as, more in ileocolonic and colonic than in ileal disease.