What are the types of skin rash? 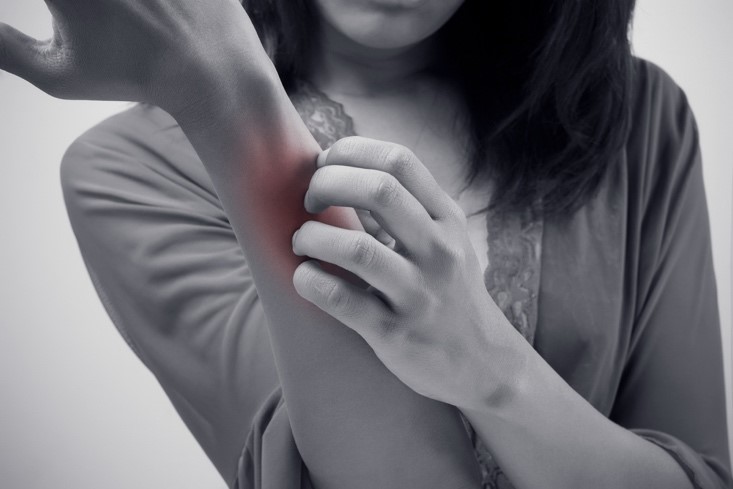 Skin rash is quite common. It usually happens as a result of the inflammation of the skin, wherein the color and texture of the skin changes and red bumps are formed. These red bumps are itchy, irritating and painful as well. Usually, a skin allergy causes the development of rashes, which if, not treated timely, can turn into a life-threatening infection. There are many types of skin rashes. Some of these are explained below:-

Veterans claim that Eczema is an umbrella term that defines many different types of conditions related to the skin – inflamed, scaly, red, and itchy. Eczema is a general condition that majorly affects children, and atopic dermatitis is one of the most common types of Eczema.

Children with atopic dermatitis showcase symptoms such as scaly and dry patches on their forehead, scalp, and face, especially during the first year of their birth. These patches, sometimes, form bumps and even discharge fluid. In addition to this, atopic dermatitis is persistent and in many cases, even causes debilitating itching sensation. If the skin allergy symptoms, in the case of atopic dermatitis, appear at a later stage of the childhood, the rashes are usually visible near the knees, elbows, neck, ankles, between the legs, and even the wrists.

In the case of adults, the condition covers a much larger portion of the body. Itching, as many studies demonstrate, can be really severe and the damage to the skin can lead to the onset of infections.

This is chronic skin infection that speaks of circular shaped rashes with red bumps. The condition is most common amid the kids and young adults.

While its cause is still unknown, people who develop is condition usually witness the formation of a ring of small, form bumps over the back of their hands, feet or the forearms.

Here, the skin allergy treatment involves the use of steroid creams or ointments as they help in killing the microbes that caused the problem in the first place. Some physicians freeze the lesions with liquid nitrogen to inject steroids directly into the ring(s). Oral drugs or ultraviolet light therapy is suggested in chronic cases.

Skin rashes in summer can be quite troublesome, especially if one has Lichen Planus. It’s an infection wherein the rash produces shiny, flat-topped bumps which are, in general, angular in shape and reddish-purplish in color. Lichen Planus, though can develop anywhere on the skin, it’s typically common in areas including the ankles, the lower legs, the back, the neck and the wrists. In some rare cases, people also develop Lichen Planus inside their mouth, hair, nails and the genital region.

Adults aging between 30 and 70 years are most prone to this skin rash type. The allergy type is most claimed to be incurable in nature, but its symptoms can be treated with anti-itch medicinal products which help in reducing the effect. Light therapy is another treatment recommended in the case the infection becomes uncontrollable.

Many skin allergy causes lead to the development of Pityriasis Rosea. Though mild in nature, the condition often instigates as a large, pink-colored scaly patch on the back or chest of the person. It further develops into more such patches which are itchy in nature and cause inflammation of the skin.

Viruses cause most skin rashes in summer, and Pityriasis Rosea is no exception. Many pieces of research showcase that the rash of Pityriasis Rosea resembles certain viral infection and it’s non-communication in nature.

Primary skin allergy symptoms of Pityriasis Rosea include the formation of large, pink-colored scaly patches followed by additional skin lesions. The spots are quite itchy and may cause inflammation of the skin as well. Most physicians do not recommend any treatment in the case of mild Pityriasis Rosea. However, in the event of more severe cases, oral medications may be prescribed to soothe the itching and eliminate the virus from the internal system.

Also known as Urticaria, Hives is quite a rare condition. Only about 20% of the people get this type of skin rash. In hives, one sees the formation of raised, itchy bumps which look like large insect bites. Unlike other known skin rashes in summer, Hives can appear anywhere on the body. It can move over or disappear and reappear on its own. The rash type can persist for as long as six weeks or more, in chronic cases.

A routine test for skin allergy can diagnose Hives. The best way to treat this problem is to identify and remove the trigger from its root. But, it’s quite challenging in nature. A combination of medications is usually prescribed to control the problem and submit the skin allergy symptoms.

Psoriasis is one of the most persistent and baffling kinds of skin disorder. It’s characterized by skin cells which reproduce almost 10 times faster than their usual rate. As these underlying cells reach the surface of the skin and decrease, their volume causes the formation of a raised, red plaque, covered with white scales. The condition commonly develops on the elbows, scalp, and the knees. Psoriasis skin allergy symptoms widely vary depending upon the type of disorder one had.

There are three main types of skin allergy treatment for Psoriasis. These are – topical treatment, light therapy, and systemic medications. In addition to these, there are quite a few alternative therapies that might be suggested by a physician in the case a patient is not fit to undergo the above mentioned three treatment types.

In addition to the above-listed types of skin rashes in summer, Actinic keratosis is another common one individuals must know about. It is a scaly, crusty growth, which is a result of the damage caused to the skin by exposure to the ultraviolet radiation, often from indoor tanning or by staying under the skin for long.

Actinic keratosis generally develops in the areas which are directly exposed to the sun or indoor tanning. The growth, in most cases, resembles warts and is rough, sandpapery in its texture. No specific test for this skin allergy is recommended. However, if the allergy appears severe, a skin biopsy may be suggested. About its treatment, Actinic keratosis usually disappears on its own and hence, no such medications are recommended. On the other hand, if the condition becomes severe in nature, specific medications along with Photodynamic therapy and surgery may be suggested.

What are the types of skin rash? was last modified: January 7th, 2020 by Team Dr Lal PathLabs